So, yeah, about that.

I dunnohis at's in myit's definitely no damn ad lately, if it's girl-juices or flattery or just plan boredom, but when I got a text from a number that wasn't already in my contacts, saying "Hey, it's Joey, I got your number from Courtnee. I thought we really hit it off at the party, just thought I'd say hi" I wasn't immediately turned off. My thinking was more like "Oh, this could be fun." I'd already experienced his advances at the party, and while it didn't exactly light my world on fire, it was good for a laugh. But at the time I intended to leave it at that.


After considering it for a while, I decided that life as a woman wasn't going to get any easier, better learn what this is like now. I could have been kind to the guy and told him I wasn't interested, but I didn't have the heart. I'm still skeptical that I could ever be interested in a guy "that way" but I wanted to at least engage him like there was a chance of that, so I could gauge his behavior. 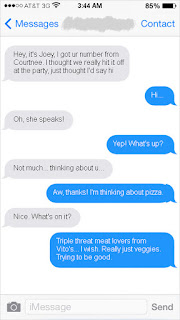 Not exactly steamy flirty talk, I'll admit. But hey I'm a real person and that was what was on my mind at the time. Like I said, I don't know if this body has flipped me around so that I'm interested in guys, but I'm definitely not seeing myself with any guy who uses "u." We talked a bit more and then he brings this up... 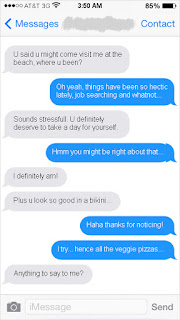 Notice me saying "haha" to things that are definitely not funny, just to reassure him that I'm still interested. That last bit was after a long pause where I seriously could not think of anything to say in response. 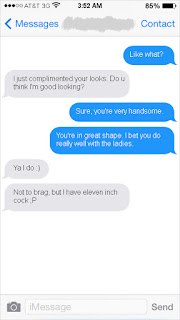 I wanted to say I had one too, in my nightstand drawer, but I could see that going off the rails quickly. I admit I was getting a bit deep into character by admitting he was attractive -- objectively, he's pretty okay but I couldn't just say that to the poor guy.

Long story short, he offered me a chance to see it for myself, and I politely declined, but it didn't end there. Every few days he would check in on me and try to strike up a conversation, which he would then turn toward the size of his member at the first opportunity. One time he asked me if it was okay that I was in his contacts as "Sexi J" and I was just like "Cool, sure, whatever." I'm just... too much of a diplomat to turn him down too harshly, because I know how bad it feels to be rejected by a chick and I just can't go through with it. So I string him along a little bit, get him all riled up just to see what he'll say, and then disappear. I feel kind of bad about it, but at least he gets to have fun chasing me. From that perspective, it's win-win.

Win-Win-Win, in fact, because after Treena told me she had had a thing with Joey, I showed her all the conversations and we had a good laugh. She felt embarrassed that she had slept with him and admitted that her jealousy toward me was more about feeling thrown away than because he was such a great guy.

As it is, this guy is just something I keep in my purse for amusement. If I need cheering up, I just go to my text window with him and prompt him for more dick-hype. One time he found a reason to tell me he sometimes jacked it twice a day. I hadn't asked. It's a strong feeling, knowing you have that kind of power over someone, to make them want to impress you so badly. Real intoxicating.

Of course he's not always talking about his junk. It's just that seems to be his favorite topic. At times it's actually quite nice to have someone to talk to who isn't Treena. It makes me wonder. If a smarter, more charming guy had gotten my number, someone I could have some common ground with or a fun response to anything he had to say... what would that be like?


(PS I didn't use real screenshots as you can probably tell, just re-created them with a website.)